The UASs have shown in the recent years their ability to probe the Atmospheric Boundary Layer. Some scientific teams have a relatively long experience and some others are coming now into this fastly growing field of activity. In BLLAST experienced and new teams will participate either during the whole campaign or in the special period at the end of the campaign. 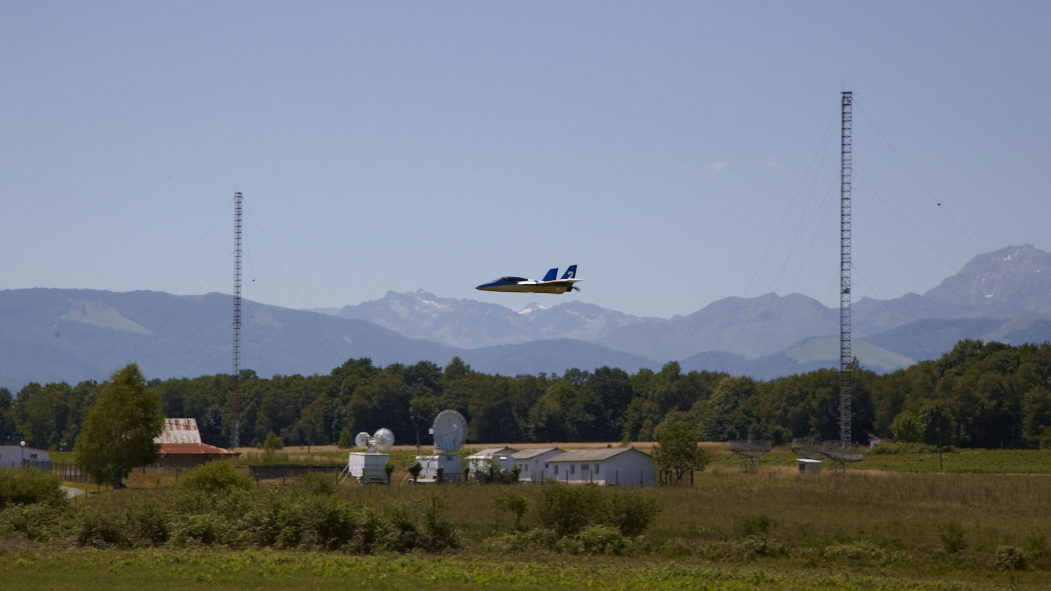 The restriction of flying in sight limits the horizontal range of operation of the UASs. The Temporary Restricted Airspace (TRA) reserved for BLLAST covers Sites 1 and 2 and has a vertical extend of 7500 feet (see Figure below). The area is a 2.25 nm radius cylinder, centred on N 43°6’18 », E 0°21’6″, and of 7500 ft height a.g.l. However the maximum height that a UAS system can reach depends on the authorization provided by the French aviation authority and is a function mainly of the previous expertise of the operating team and of the flight hours of the platform. Besides, when aircrafts will be in operation over the area, UASs will be restricted to fly below 2500 ft QNH feet and the aircratf above 3000 ft QNH. A coordinator of UASs operations will be in charge of organizing the flight schedule of UASs.

Three teams will operate during the whole campaign, those of the Universities of TÃ¼bingen (Bange/Kroonenberg), Braunschweig (Martin/Aschenbrenner) and Bergen (Reuder/Jonassen). The first two are suited for flying relatively long well levelled legs, allowing for the computation of means and fluctuations, from which estimation of turbulent covariances can be obtained. The latter uses the small UAS SUMO, mainly used for profiling up to some thousands of meters, but lately also for flying legs at lower heights than the other two systems.
The last days of BLLAST comprise a special period for UASs testing and inter-comparison. The participating teams may contribute to the general objectives of the experiment. They will be centered in Site 1. A small multicopter and a fixed wing plane will be operated by the University of Lippe (HSOWL). The University of Bremen will use a fixed wing and may bring a multicopter. The University of Heidelberg will test their new plane intended to measure surface properties. Finally the Technical University of Zurich will test their new UMARS which will measure atmospheric variables and gases.
Below is a complete list of the UAS which will fly during BLLAST:

Depending on the situation, several UASs may fly simultaneously, or one after the other. The flying strategy will also depend on the aircraft strategy, as both airplanes have to be combined securely in space and time. We can divide the flight strategy into three kinds: (1) horizontal exploration, (2) vertical structure exploration and (3) soundings. Repeated legs at same height and on same axis by the same UAS will give a very interesting information about the evolution of turbulence along this leg. So repeated missions along the day will be favoured.

Corresponding to (and possibly simultaneously with) the aircraft vertical structure mission, there will be one mission with stacked legs: 2 to 3 UASs will fly together the same axis, one on top of each other. When the aircraft will be flying above, the 3 UASs will focus on the lowest atmosphere, below 2500 ft QNH, and will be able to extend their vertical exploration the rest of the time.

Corresponding to (and possibly simultaneously with) the aircraft horizontal variability, there will be a second mission with parallel axis flown by 2 to 3 UASs together.
The SUMO can make dense horizontal exploration 60 above ground, with measurements of the surface temperature, allowing the mapping of surface temperature above the two super sites. SIRUS II, with the same kind of flight, will make very high resolution visible images of the surface from above. Multicopters will have similar flight strategy at smaller scale, flying a few m only above the ground. At the small scale heterogeneity site especially, the multicopter operated by the team of the University of Lippe (HSWOL) will fly transects over the square at selected levels (starting at 2m) and provide profiles below 100 m above ground level. The information that will be provided will be air temperature and humidity and surface temperature. This team will operate from June 27 to July 8.

SUMO UAS is able to make soundings up to the top of the TRA within 15-30 min. It will be one of the missions of the SUMO to make frequent soundings of the atmosphere.

From July 1 to 8, the morning hours before BLLAST IOPs (which will start at 14h official local time) are free time to proceed to special tests devoted to UASs operation. Intercomparison flights between drones, special flight strategies of one or more systems, testing instrumentation using other reference data (ballon, tower, profilers, surface instrumentation). The interaction between teams is expected to be very beneficial for all.
During the IOP time, the participating teams can join the common effort and participate in the different aspects of the BLLAST.